Though BTC prices support last week’s view that digital asset markets remain in a downward trending regime, macro and fundamentals suggest changes are in the wind. Sunday marked the lowest close in two years at $16.3k BTC. Though it ended the free-fall, last week continued a negative trend for BTC price. Short term return trends moved up but remain below the long-term trend. Though prices could go marginally lower, we expect returns to incrementally climb in the short-term. Though prices support our view from last week that better entries lie ahead, returns suggest waiting has low utility. 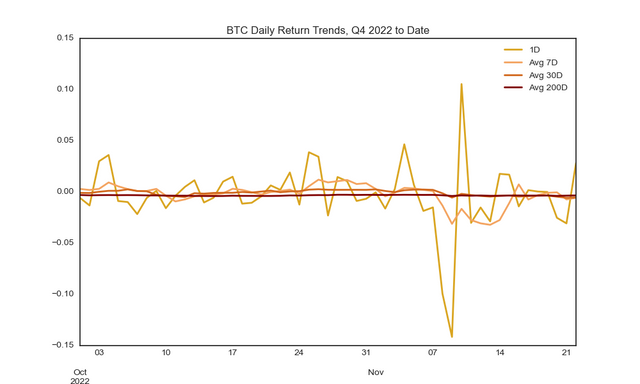 The US Fed released November FOMC minutes today to a second consecutive positive day for risk markets. The minutes listed signs of domestic and international economic weakness. Consumer and business spending growth decreased in October while energy costs rose across the world. They expected these conditions to put near-term GDP growth below trend and weaken inflation by balancing aggregate demand with supply.

The committee conveyed confidence that monetary and interest rate policies would be effective to reduce inflation. Jay Powell’s message from the meetings press conference echoed these sentiments with emphasis on the commitment to lower inflation.

Continuing and initial jobless claims today exceeded consensus expectations and the previous month’s levels to confirm slower US growth. Tighter financial conditions are slowing hiring, as designed. While equity returns caused concern over market expectations out of sync with the economy, merely stable inflation would be enough to ease recession expectations and stablize growth expectations. Recognition that a soft landing could materialize may be enough to encourage risk-taking after last quarter’s sell-off. The macro picture is supportive for risk and digital assets.

Genesis flirting with bankruptcy would shock markets again. However, every day they can resolve their liquidity and solvency issues out of court is positive for digital assets.

Fear of the Grayscale BTC holdings getting re-hypothecated, sold, or even Grayscale’s opacity have subsided. The FTX collapse proved no firm is beyond scrutiny. However, Coinbase is a publicly-traded firm with an audit and multiple SEC filings each year. They are as secure a custodian can be.

Bitcoin 30D hash rate stalled at 262 PH/s today.
From here, lower hash rate would be the final stage of miner capitulation and consolidation. Miners are likely to sell BTC holdings before machines to raise cash. The worst-performing miners sold BTC all summer as energy prices increased.

Stable hash rate would indicate consolidation and support long-term BTC mining growth. However, liquidated machines will not get turned on unless BTC price exceeds energy cost to mine it. The most efficient miners are profitable above $10k BTC, and potentially lower. One and two generation old machines are nearing breakeven at $15k BTC. After unprofitable miners closed operations this year, we expect miners to consolidate and build over the long term.

The international crypto exchange shocked the industry when it announced top competitor, Binance, would acquire FTX to rescue it from insolvency. Now, with Binance out of the deal, and FTX Group filing Chapter 11 proceedings in the US, we will discuss our immediate expectations for digital assets markets.

Is this the final fallout after this summer’s lending crisis? What events do we expect to unfold in the coming days and weeks? Will the FTX collapse have long term effects on industry governance and regulation?

Please join Enigma Securities as we break down digital asset markets after the FTX bankruptcy filing.

The international crypto exchange shocked the industry when it announced top competitor, Binance, would acquire FTX to rescue it from insolvency. Now, with Binance out of the deal, and FTX Group filing Chapter 11 proceedings in the US, we will discuss our immediate expectations for digital assets markets.

Is this the final fallout after this summer’s lending crisis? What events do we expect to unfold in the coming days and weeks? Will the FTX collapse have long term effects on industry governance and regulation?

Add to your calendar:

Polygon’s MATIC token reaped the fruits of Polygon Labs’ business development labors this year after Meta announced it’s full suite of NFT integrations with Polygon yesterday. Since the update, MATIC rose 8% – over 6% better than ETH and BTC. Right now, no other network is doing more for mainstream adoption than Polygon.

The existing integration with Instagram will expand to Facebook, according to a Meta Platforms. Since May, Instagram users could post their existing NFTs to their feed with data from OpenSea. The latest update will allow users to start their NFT journey on Instagram or Facebook. The new features will start with Polygon support, and expand to Solana with Phantom wallet support later. 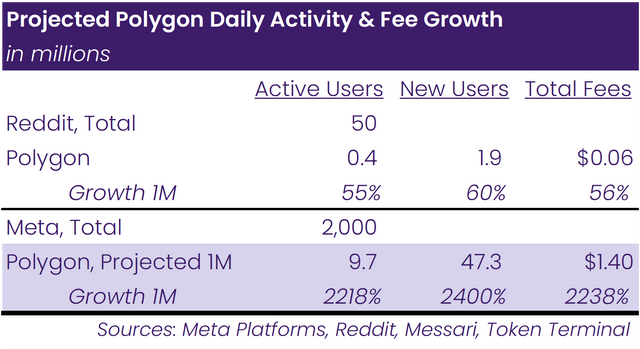 Everyone knows not to trade FOMC meetings. The last meeting in September saw $37M in BTC liquidations – $28M of which were shorts. While BTC price held up the last time Chair Powell announced a rate increase, correlation to equity markets has spelled disaster for BTC price during the previous four FOMC meetings this year. 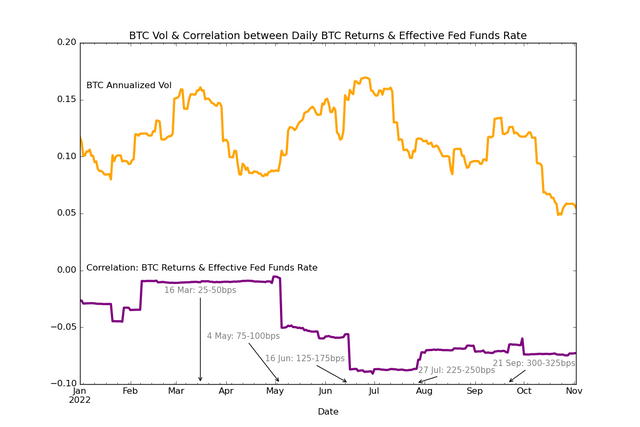 While the expected inverse relationship between BTC returns and the Effective Fed Funds Rate grew this year, it weakened since September’s meeting. As the US central bank raised it’s target base interest rate five times this year to 3.08% as of yesterday, daily BTC volatility diminished.

After months of industry chaos and generally bearish sentiment, sellers ran out of BTC to panic dump during FOMC meeting. Moreover, the market has adjusted to rate increases. During today’s meeting, we’ll be watching the liquidation charts to see whether leveraged traders have adjusted their expectations as well.

The EU’s final MiCA text with last minute changes to stablecoins and NFTs, expected in 2024

The Financial Stability Board recommendations on crypto-asset regulatory frameworks, breaking up some crypto firms, and much more

To stay up to date, you need the alpha in Vellir Policy Monitor.

Please reach out to your Enigma representative or Research Analyst John Freyermuth to discuss the latest on policy with Project Vellir.

No comments to show.

No archives to show.